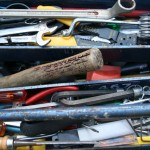 A couple of months ago, I stopped to help a driver on the side of the highway. It turned out to be a lady who had a flat tire. Asking if she had a spare, she said that she did, along with the tools to change it, but she just didn’t know how.  A few minutes later, I had her on her way, having also explained each step so she would know what to do in the future. This got me thinking.

Christians in America have more “tools” available to them than any other generation of Christians in history. The average American Christian has multiple Bibles in their home, often in different translations.[1] Many American churches offer book and/or video libraries for their congregations. Most churches will offer some level of training/discipleship/Bible study. It is mind-boggling how many free references are available online. Early Christians who risked their very lives for a chance to read and quickly copy down a partial manuscript of one of Paul’s letters would’ve fainted to see what we have available at our fingertips. Current Christians in repressive countries who face being executed or sent to labor camps for owning Scriptures would cry at the sight of 8 or 10 different Bibles gathering dust on the shelves of an American Christian’s home. I’ve been able to download (for ridiculously little money) entire reference libraries of Bible commentaries, systematic theology books, and collections of classic writings from the early church fathers to the puritan writers, all the way to the present. A person can carry an entire pastor’s library on their cell phone now. If I want to see what a particular Bible passage says in the original Hebrew or Greek, that is easily accomplished.[2] If I want to learn Greek to dig deeper, a basic understanding is also well within reach of the average person.[3] But “from everyone who has been given much, much will be required.”[4] We as Christians in America are really without excuse.

And yet, this is also the most Biblically illiterate generation of Americans. It is, in effect, like driving around in a mechanic’s truck, with enough tools on hand to completely overhaul the truck, and saying we’ll need to call for help to change the flat tire. Why is that? I think for the most part, we don’t ever make the time to learn what we believe or why we should believe it. A few years ago, I was living in blissful ignorance, content to believe in Christ for my salvation, but that was really the extent of it. I had started digging deeper into the Scriptures in high school, but had been lulled to an apathetic sleep after that. Then I went on a jobsite visit with an atheist colleague a few years ago. On the 3 hour drive back, he asked me something that had been bugging him:

“How can you call yourself a Christian and an engineer at the same time? Aren’t those kind of mutually exclusive?”

The question caught me off guard and shocked me out of my slumber. I answered at the time that I didn’t see how I could be an engineer – seeing the design in nature that far exceeds anything I would ever think up – and not be a Christian. But that answer was more based on intuition then. Since then, I started digging into the Bible, into cosmology, into genetics, into information theory, into philosophy, into logic, into epistemology, and anything else that relates to how we understand the world around us, one that I would say is God’s world. And if it’s God’s world, then there is no contradiction between science and Christianity, because God is the same consistent Author of both. Not that one needs to get into all of that to come to a saving faith in Christ, mind you; but it does confirm that every tool in the toolbox of life points to God the Creator of life. Whether we use the tools of science, or philosophy, or history, or theology, we keep coming back to God.

It’s been hard work reading and studying a diverse number of fields; I do have a “day job” as an engineer (that sometimes bleeds into the night and weekends as well). There are the typical chores of life to squeeze in as well – changing the oil in the car, home maintenance, and so on. But I wouldn’t trade the experience for anything, for it has brought me closer to my God, for Jesus’s command to “love the Lord your God… with all your mind”[5] is like sweet honey to me. And I dare say it can be for you, too.

As J. Warner Wallace, former atheist cold-case homicide detective turned Christian case-maker, is fond of pointing out, the Bible tells us that some are called to be teachers and evangelists and whatnot[6], but all of us Christians are supposed to be able to give a reason for the hope that we have.[7] Can you?  Maybe it’s time to do a little self-evaluation. Is church something to endure once a week to “pay your dues”, or is it a chance to get some training that you can hopefully put into practice in the upcoming week?   Is your faith a warm, fuzzy, vague, feel-good, emotional crutch, or something you believe because it’s true? Is being a Christian simply “fire insurance” to get out of hell, or an exciting chance to serve under the King of all creation? As Chuck Colson said, “the church does not draw people in; it sends them out.” So choose today to learn to use the tools that God has put in your hands, and go out prepared for the opportunities He brings you!

[1] According to the 2014 State of the Bible survey by Barna, almost 9in 10 Americans own a Bible, and Americans (overall) average almost 5 Bibles per household.
[2] Check out www.biblehub.com for handy interlinear translations where you can read the the English Scriptures with the Hebrew or Greek above each line (like this).
[3] I recommend Basic Greek in 30 minutes a Day, by James Found (Bethany House, 2012), for a surprisingly effective way for the average person to learn a fair bit of Greek easily.
[4] Luke 12:48.
[5] Matthew 22:37.
[6] Ephesians 4:11.
[7] 1 Peter 3:15.