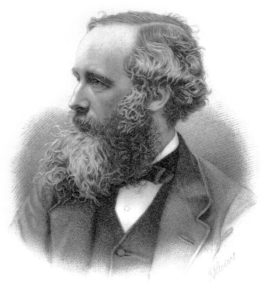 As we continue this series examining the Christian faith of the great men of science, I hope you enjoy today’s subject as much as I’ve enjoyed learning about this amazing man. Now, let’s look today at the scientist who paved the way for Einstein. In fact, Einstein summarized this man’s contributions by saying “One scientific epoch ended and another began with James Clerk Maxwell.”[1] A 1999 poll of 100 leading physicists ranked Maxwell as the 3rd greatest physicist of all time (behind Einstein and Newton). But while modern scientists ranked Newton ahead of Maxwell, Einstein himself, when asked if he stood on Newton’s shoulders, replied, “No, I stand on Maxwell’s shoulders.”[1] That’s pretty high praise coming from the man whose name is practically synonymous with revolutionary genius.

So what exactly did Maxwell do to earn this reputation? He crammed a lot into a short time considering he was only 48 when he died. Studying the nature of colors and color-blindness and producing the world’s first color photograph would’ve been noteworthy by itself. Astronomers would still remember him today just for settling 2 centuries of debate by proving through mathematics that the rings of Saturn couldn’t be solid as originally assumed. Astronomer George Biddell Airy called this “one of the most remarkable applications of mathematics to physics that I have ever seen.”[2] And while his engineering work was more obscure, it was enough to get him in the Scottish Engineering Hall of Fame[3] and impress this engineer! But his truly world-changing work was in developing the equations of electromagnetism bearing his name. Einstein divided scientific history at Maxwell because Maxwell connected electricity with magnetism as different aspects of the same electromagnetic waves, and concluded that light was also this type of wave. This transitioned science from a particle-centric view of physics to a wave-centric view that then opened the door for nearly every modern technology we enjoy. There is little that is “high-tech” that is not affected by this paradigm shift in physics. Think of your X-rays and MRI’s at the hospital, your cell phones and GPS and coffee shop Wi-Fi, the radar at your airport, the microwave oven in your kitchen, and on and on. And these are just some of the common practical reminders of the impact of Maxwell’s equations.

Now that we’ve established Maxwell’s credentials as a giant of science, what did he think of God? Did he give the subject much thought? Did he apply his sharp mind to theology? Indeed! Although he was quieter about his faith than Robert Boyle and wrote no papers or books in defense of the faith like Boyle, Maxwell nonetheless showed himself to be a very devout – and thoughtful – Christian. Although he had grown up in a Christian home, he was a notoriously and insatiably curious boy, and he didn’t just apply this curiosity to the physical world around him. In a letter to his friend Lewis Campbell in 1852, written while pursuing a Fellowship at Cambridge, Maxwell wrote at length of his thoughtful investigation of Christianity (condensed here, believe it or not):

“Now, my great plan, … is to let nothing be wilfully left unexamined. Nothing is to be holy ground consecrated to Stationary Faith, whether positive or negative. …. The part of the rule which respects self-improvement by means of others is: —Never hide anything, be it weed or no, nor seem to wish it hidden …. Again I assert the Right of Trespass on any plot of Holy Ground …. Such places must be exorcised and desecrated till they become fruitful fields. Again, if the holder of such property refuse admission to the exorcist, he ipso facto admits that it is consecrated…. Now I am convinced that no one but a Christian can actually purge his land of these holy spots. Any one may profess that he has none, but something will sooner or later occur to every one to show him that part of his ground is not open to the public. Intrusions on this are resented, and so its existence is demonstrated. Now, I do not say that no Christians have enclosed places of this sort. Many have a great deal, and every one has some. No one can be sure of all being open till all has been examined by competent persons, which is the work … of eternity. But there are extensive and important tracts in the territory of the Scoffer, … and the rest, which are openly and solemnly Tabooed, … and are not to be spoken of without sacrilege.

Christianity—that is, the religion of the Bible—is the only scheme or form of belief which disavows any possessions on such a tenure. Here alone all is free. You may fly to the ends of the world and find no God but the Author of Salvation. You may search the Scriptures and not find a text to stop you in your explorations. You may read all History and be compelled to wonder but not to doubt. …

The Old Testament and the Mosaic Law and Judaism are commonly supposed to be “Tabooed ” by the orthodox. Sceptics pretend to have read them, and have found certain witty objections … which too many of the orthodox unread admit, and shut up the subject as haunted. But a Candle is coming to drive out all Ghosts and Bugbears. Let us all follow the Light.”[4]

Moreover, his collected letters to his wife show a sincere faith as they read the Bible when together and apart. In his letters, though he professes to be no expert on interpretation of Scripture, he nevertheless expounds on their shared reading with sincerity and piety and the utmost respect for the passage.[5] In fact, his friend and biographer summed up this trait of Maxwell’s when he wrote, “a spirit of deep piety pervaded all he did, whether in the most private relations of life, or in his position as an appointed teacher and investigator, or in his philosophic contemplation of the universe. There is no attribute from which the thought of him is more inseparable.”[6]

After Maxwell’s death, Colin Mackenzie, his cousin and one of the executors of his will, said  that he remembered Maxwell saying in his latter years, “I have looked into most philosophical systems, and I have seen that none will work without a God.”[7]

At his painful death from stomach cancer, his doctor noted, “No man ever met death more consciously or more calmly.”[8] This is only fitting for a Christian, who, like the Apostle Paul, could say “I know whom I have believed and I am convinced that He is able to guard what I have entrusted to Him until that day.”[9] Yes, this giant of science gave Christianity a good deal of thought, and saw it to be quite reasonable, – indeed, the only reasonable way to live. Friend, do you have doubts of the truth of Christianity that you are content to leave as doubts? Follow Maxwell’s lead and leave nothing willfully unexamined, especially your doubts. Rather, let those doubts push you to seek the truth incessantly, and not rest in convenient answers. If you persist, you will find that they eventually lead you right back to God.