We live in divisive times. It seems like battle lines are drawn along every form of differentiation possible. People have long fallen into “us vs. them” attitudes towards other nationalities or ethnicities, and politics and religion have often been points of conflict between different groups, and even among those who are otherwise friends. But it seems like every single issue that comes up these days is a source of friendship-breaking, hate-inspiring animosity between people. Pick almost any issue in the marketplace of ideas and you can find people ready to go to war over it. Some of the language used about the opposing side in a debate gets pretty crazy. But in this “mad, mad, mad, mad world”, the love of God and its effects on us stand out in most dramatic contrast. For God creates family out of enemies. What do I mean by that? Let work through that today.

“If we are all naturally God’s enemies, hence we may learn what a spirit it becomes us as Christians to possess towards our enemies. Though we are enemies to God, yet we hope that God has loved us, that Christ has died for us, that God has forgiven or will forgive us; and will do us good, and bestow infinite mercies and blessings upon us, so as to make us happy for ever. All this mercy we hope has been, or will be, exercised towards us. Certainly then, it will not become us to be bitter in our spirits against those that are enemies to us, and have injured and ill treated us; and though they have yet an ill spirit towards us. Seeing we depend so much on God’s forgiving us, though enemies, we should exercise a spirit of forgiveness towards our enemies.”[1, Eph 4:32]

Enemies of God and enemies with each other, we say we seek unity and peace while dividing over the smallest things. Yet God works miracles in human hearts to reconcile us both to Him and to each other in ways impossible in our fallen, yet pathetically prideful, humanity. And one day, we will see  “a great multitude which no one could count, from every nation and all tribes and peoples and tongues” worshiping God before His throne [Rev 7:9], people who should’ve been enemies on earth, but who have been adopted into God’s family, healed of hate, and united together forever. That’s a beautiful family reunion right there. Are you part of that family? Do you want to be?

[1] See Jonathan Edwards, “Discourse on How Men Naturally Are God’s Enemies” (1736),  for a lengthy treatment of man’s natural enmity toward God. 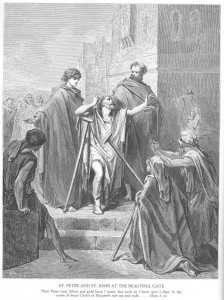 Today I want to continue looking at the strong evidential nature of the Christian faith exemplified in the Bible. In Luke’s history called the Acts of the Apostles, he records that Peter and John went into the Temple one afternoon, when a beggar was being carried in to beg for money. [Acts 3] Seeing the two apostles, he asked them for money. But then he got something he never expected — healing. Peter said to him, “I do not possess silver and gold, but what I do have I give to you: In the name of Jesus Christ the Nazarene—walk!”[3:6] Peter took his hand and pulled him up, “and immediately his feet and ankles were strengthened.” We are next told that the people saw the man walking, leaping, and praising God[3:8-9], and they took note that he was the lame beggar who used to beg for money there. They recognized the man and understood this was a big deal. So Luke records that the people came running up to Peter and John “full of amazement”.

At this point, Peter took the opportunity to preach an impromptu sermon. Not one to mince words, Peter explained that it wasn’t by their own power that they had healed the beggar, but only by the power of Jesus, whom the people had “disowned” and “put to death”, but whom God had raised from the dead, “a fact to which we are witnesses,” he says.[3:12-15] Peter balances his brutal honesty with grace though, and adds that he understands they acted in ignorance,  as did their rulers, and that this had to happen to fulfill God’s prophecies. Nevertheless, they should repent and return, for ignorance is still no excuse. The people responded to this clear evidence in front of them, coupled with the apostles’ eyewitness testimony as to the source of the miracle.[Acts 4:4] Their leaders, on the other hand, didn’t take so kindly to Peter’s chastisement: the Sanhedrin, the ruling council, had the temple guards come arrest Peter and John, and bring them to be interrogated the next day. When asked by the Jewish religious leaders by what power they had performed this apparent miracle, Peter again pulls no punches, and plainly tells them that it was in the name of Jesus, the one they had crucified, but God had raised up again. Luke goes on to write that “seeing the man who had been healed standing with them, they had nothing to say in reply” to Peter’s rebuke. The fact of the matter was actually standing before them.

What was their decision then? They reasoned, “What shall we do with these men? For the fact that a noteworthy miracle has taken place through them is apparent to all who live in Jerusalem, and we cannot deny it.”[4:16] Indeed, the man healed was over 40 years old [4:22] and had been lame from birth [3:2]. He was a regular sight at the temple and would’ve been known to any of the Jews there. And now he was walking, leaping, and praising God.[3:8-9] They certainly couldn’t deny that! But they still chose to reject the source of the miracle, ordering Peter and John to speak no more of this troublesome Jesus. But facts are indeed stubborn things, and Peter and John replied that, “Whether it is right in the sight of God to give heed to you rather than to God, you be the judge; for we cannot stop speaking about what we have seen and heard.” [4:19-20] Not some appeal to vague or subjective mysticism, this passage is filled with appeals to concrete observation, testimony, and good reasoning.

But there is another interesting part of this story. Our historian, Luke, records that as this tribunal observed the confidence of Peter and John, and discovered that they were uneducated and untrained men, they too were amazed, and “began to recognize them as having been with Jesus.”[4:13] Over this 3 month long series on evidential faith, we’ve looked at the biblical appeal to a well-founded faith based on evidence of observed miracles and eyewitness testimony and sound reasoning, but here we see another type of evidence – and a critical one at that: transformation. If you’re a Christian, does your life show the evidence of the Lord of all the universe living in you, renewing your mind, [Rom 12:2] sanctifying you[1 Cor 6:11], and transforming your life so that you may “like the Holy One who called you, be holy yourselves also in all your behavior”[1 Pet 1:15]? The Pharisees’ recognition of the apostles’ closeness with Jesus is a sobering reminder for us that Christ calls us to be different from the world in a way that only He can accomplish. Long after those that were healed have died, and far from the scene of the miracles, where no direct witnesses were ever available to testify about them, our transformed lives should be an undeniable fact that stands up boldly to a skeptical world’s scrutiny.