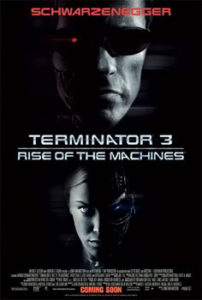 Anybody else remember the 3rd Terminator movie where the T-850 (Schwarzenegger) has been programmed to go back in time to protect John Connor, the future leader of the Resistance, but the new evil Terminatrix has reprogrammed him to kill John? Schwarzenegger comes lumbering toward John warning him to stay away from him because he can’t control his actions anymore. As he has pinned John on the hood of a car choking him, John asks the T-850, “What is your mission?” He replies, “To secure the survival of John Connor and Catherine Brewster.” John then delivers the classic response, “You are about to fail that mission!”

Now what does this little bit of movie nostalgia have to do with anything? Well, some skeptics try to lay the blame for a lot of the injustice in the world at the feet of Christians. Christianity is supposedly to blame for wars throughout history, slavery, the repression and abuse of women, minorities, and a host of other categories of people, the hindrance of science and technological development, the holding back of society from advancing, and so on. There’s only one problem: a lot of the things blamed on Christianity, even if perpetrated by Christians, are not compatible with the mission of Christianity. Let’s look at some of the tenets Jesus Christ and His early followers passed on to us that the skeptic needs to take into account before blaming Christianity for societal ills.

You see, a true Christian will live a life in line with Christ’s teachings, for we are disciples, and a disciple emulates his master. We won’t do it perfectly, especially at first, but God gives us His Holy Spirit to indwell us. He works in us to mold us and conform our desires to match His. Think of it like getting on a diet – your appetites don’t match up with the new healthy diet at first, but you choose to conform your appetites to the diet because you know it’s better for you than your old way of living, and gradually, you learn to actually enjoy the new foods. Then, living on the diet is not a burden but a pleasure because your will now matches the diet plan. But spiritually, that realignment of will can only happen through the Holy Spirit’s regenerative work in us. But many who claim the title of Christian, aren’t. In fact, Jesus gave the sobering warning that there would be many at the last judgment expecting entrance to heaven, only to hear Him say, “I never knew you.” [Mt 7:21-23] We are known by our fruit – i.e. our actions. Talk is cheap, and, as they say, “actions speak louder than words.” And indeed, the Bible repeatedly affirms that the proof of our faith is not in mere words but in our character and the actions that flow from that [Jn 13:35, 1 Jn 4:20, Jm 2:14].

Maybe you’ve seen someone claiming Christ on Sunday and living like the devil the rest of the week, and thought that Christianity really is just a big show with a rotten core underneath, that religion really does “poison everything”. But we must remember that “abusus non tollit usum” – the misuse or abuse of something is no argument against its proper use (i.e. just because a person can use an axe to murder someone doesn’t mean that axes are inherently bad). Look at the fruit of true Christianity, the fruit of those truly on mission for Christ, and you will not find any viable source for the atrocities and horrors with which atheists try to saddle Christianity. It is only in counteracting the commands of God and failing His mission for us that those kinds of results are possible.