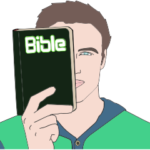 Previously, I detailed scientific reasons why abortion is, in fact, murder. In that post (here), I mentioned that these are reasons to support the Christian position on abortion. But what is the Christian position on abortion? In the past, I would’ve said it was a unanimous agreement that abortion is wrong. But in researching this, I found there are segments of Christianity that do support having the option to abort a baby under some conditions.[1] So it would seem that Christians aren’t unanimous on this question. For us, it always comes back to what the Bible says, and sure enough, Christians supporting abortion choice do try to justify their view with the Bible. Let’s dig into that today and see if there is a biblical case for abortion. Here are a few of those attempts to justify this practice.

There’s 5 attempts to justify abortion using the Bible. Hopefully, you’ve seen that these simply aren’t good reasons. Have you come across other justifications for abortion that you believe are legitimate? Share them in a comment and let’s work through them together. 🙂