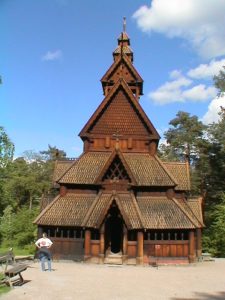 As an engineer, most of the states I’m licensed in require that I take continuing education courses to keep up with new technology, new laws and codes, new analysis methods, and so forth. A recent email advertised a webinar on “Design Considerations for Wood Frame Construction for Permanence.” I admit, I work primarily with steel, and live in a part of the US with high humidity and termites, so I tend to not associate the words “wood” and “permanence”. But the picture in the email caught my eye because it was something I’ve had the opportunity to see for myself: a Norwegian Stave Church. These are wooden church buildings built in Norway in the Middle Ages, with the oldest surviving one being almost 900 years old. That’s about as permanent as you can get with wood construction! They are beautiful buildings to walk through, and a real testament to the craftsmanship of those early builders.

That reminder of permanence made me think of a project I played a small part in recently, at the opposite end of the spectrum, where I did some steel connection design for a new multipurpose community center being built in a nearby city. What was surprising about that project was that this new building was being built over an old airport. In fact, the swimming pool was going to be practically in the middle of where the runway had been. Now, an airport is usually a big infrastructure investment for a city. Yet that airport was being demolished to build a community athletic center. Soon there will be no evidence left of this significant land use other than a few oddly aviation-related street names, and a listing in outdated maps that will get replaced shortly. Eventually, streets will be renamed and/or rerouted, and there will be no physical evidence left that there was ever an airport there. So it is with much of what we design and build. Even when we design for an indefinite service life, most of our finished projects will likely be demolished at some point because their location is more valuable for some future enterprise than the building we invested so much time in designing.

What will archaeologists 1000 years from now find to tell them about our culture? With our culture’s emphasis on updating, recycling, “planned obsolescence”, and designing for defined product lifecycles instead of indefinite use, would future people be able to ascertain any specific details of our civilization? Especially in our digital age, there is surprisingly little durable evidence of much of what we do. That’s something to keep in mind when approaching the Bible. We don’t have physical evidence for everything described in the Bible, but it’s actually pretty amazing that we have any evidence from so long ago.  And what we have found matches up well with what the Bible describes. Rather than look at the absence of confirming evidence as a strike against the Bible as so many have, look at how much is confirmed. As the archeologist Sir William Ramsey found when he went to Asia Minor in the late 1800’s to investigate the historicity of the biblical book of Acts, the evidence speaks for itself. In fact, he tells us that “I may fairly claim to have entered on this investigation without any prejudice in favour of the conclusion which I shall now attempt to justify to the reader. On the contrary, I began with a mind unfavourable to it, …. It was gradually borne in upon me that in various details the narrative showed marvelous truth.”[1] You see, Ramsey approached the case regarding the authorship of Acts from the then-currently espoused view that Acts was written by an anonymous Christian centuries after the events described, motivated more by pushing an agenda than telling the truth. But he was open to other possibilities and willing to follow the evidence wherever it led him. And it led him to the conviction that Luke was the author of Acts and was an eyewitness and was, in fact, a historian of impeccable quality. In the 100+ years since Ramsay investigated the claims of the Bible, even more corroborating evidence has been discovered to support the book of Acts and many other accounts in the Bible (read more here).

We live in a constantly changing world where permanence is a very relative term. “Here today, gone tomorrow”, as the saying goes. Knowing that, a lack of evidence for historical events shouldn’t surprise us. Many ancient events took place in oral cultures where little was written down. Even when they were recorded, those records have often been lost forever due to wars, political purges, floods, fires, earthquakes, and other destructive events. But when we have a record like the Bible that continues to be confirmed over and over again,  we have to set aside whatever skepticism we approached it with, and be willing to admit when we’ve gone beyond “reasonable” doubt. As Ramsay would say, “We must face the facts boldly.”[2] When we do, we find that they lead straight to God.