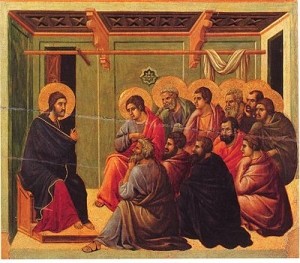 Working our way through the apostle John’s testimony of the life of Christ the last few weeks, we’ve been seeing example after example of Jesus calling on people to believe in Him based on the evidence presented. He didn’t ask people to blindly accept this incredible story of God lovingly, mercifully reaching out to mankind in spite of our rejection of Him. Unlike the ravings of a lunatic claiming to be someone he’s clearly not, Jesus’ claims to be God were backed up with demonstrations of supernatural power.

Looking at the 13th through 15th chapters of John today, we read 3 more examples of Jesus appealing to evidence. John records Jesus telling His disciples that one of them would betray Him, and saying, “I am telling you before it comes to pass, so that when it does occur, you may believe that I am He.” [John 13:19] In the next chapter, He tells them of His eventual ascension and return to God the Father. Again he says, “now I have told you before it comes to pass, that when it comes to pass, you may believe.” [14:29] In both instances, He is telling them what will happen, and calling their attention to it, so that when it does come to pass, they will understand the significance of it. Another aspect here is that the Old Testament law had 2 tests regarding prophecy. If a prophet made specific prophecies that did not occur, then he was to be considered a false prophet and be put to death. [Deuteronomy 18:20-22] And if a prophet performed some sign or wonder to accompany his words, but his teaching was such as to lead the Israelites away from God to chase after other gods, then they were to not follow his teaching, even with the evidence of supernatural power accompanying it. In fact, they were to put him to death as well. [Deut. 13:1-4] False prophets were not taken lightly. Yet Jesus is effectively telling them, “Don’t believe me if I don’t pass the test. But when I do, believe.”

In chapter 15, Jesus is telling His disciples that the world will hate and persecute them because of Him, for the world hated Him first. Then He tells them, “If I had not done among them the works which no one did, they would not have sin; but now they have both seen and hated Me and My Father as well.” [John 15:24] Clearly, He is appealing to the nature of His miracles as condemning evidence against those who saw His works and rejected Him. These were not some parlor tricks or the cunning work of some traveling charlatan. These were genuine miracles – alterations of our material reality that are impossible without God, the author of this reality. But perhaps you might question the originality of His miracles. Doesn’t the Old Testament describe people like Moses and Elijah and other prophets also performing great signs? Didn’t Elijah even raise the dead?[1 Kings 17:17-24] How could Jesus say that no one else had done the works He did? Here’s the difference. The prophets were performing those miracles as agents of God, in His name, and only by His power. Jesus performed His miracles directly, not as appeals to God to act on His behalf, for He is God.

John wrote down for us another insight into the evidential nature of biblical faith when he recorded Jesus telling them, “you will bear witness also, because you have been with Me from the beginning.” [John 15:27] Why did Jesus want the disciples to be His witnesses to the world? Was it their eloquence? Their charisma? Their political connections? Their respected positions in society? Their education? These might all be attractive and useful qualities for someone wanting to start a worldwide movement. What mattered to Jesus was the same thing that matters in court: that an eyewitness actually be at the scene that he testifies about. And this is why it was these men – these dirty, poor, “unlearned” men – that were to be His witnesses. They had been eyewitnesses from the beginning, and could truthfully report what had happened.

In the end, we believe Christ’s story, not because it is comforting (though Jesus is our comfort), but because it is true. This has always been the emphasis in Christianity, and with good reason. If it’s not true, then why believe it? If it’s not true, then, as the apostle Paul himself would say, “we are of all men most to be pitied.” [1 Cor. 15:19]