As we have just celebrated Palm Sunday, and are looking forward to Easter next Sunday, I am reminded of the strong historical emphasis in the Bible. Why is that significant? Let’s work through that today.

Palm Sunday is the day Jesus rode into Jerusalem on a donkey while people honored Him like a king by putting their cloaks and palm branches in the road before Him [Mt 21:8]. Good Friday commemorates the day later that week that Jesus was crucified and buried [Jn 19:41-42]. Easter, or Resurrection Sunday, is the day He rose from the dead, accomplishing the mission He came here for [Mk 16:1-8]. Notice that these are all public, rather than private, events. For instance, when Moses beheld the burning bush in the desert, and heard God speaking to him from it, that was a private event; Moses was the only human there to tell what happened. However, God later confirmed that He was working through Moses via some very public events in Egypt in the form of the plagues He brought on the Egyptians. And while the Bible records a variety of private events like dreams and visions, it is interesting how often God points us back to public events that could be confirmed by multiple witnesses as testimony of His trustworthiness in the present and future. For instance, the apostle Paul refers to the Resurrection as having provided proof to all men that Jesus is the one chosen by God to judge the world [Ac 17:31]. And as Paul told King Agrippa at his trial, these things weren’t “done in a corner” [Ac 26:26]. Indeed, Paul writes to the Corinthian church listing the various witnesses of Christ, and mentions the fact that over 500 people saw Him at one time after His resurrection, many of whom were still alive at that time [1Co 15:3-8]; his readers could fact-check him if they wanted. The apostle John consistently refers to the fact that he and the other disciples had been present during Jesus’ life, and had witnessed His message and His miracles [Jn 19:34-35, 21:13-14, 1Jn 1:1-3]. Luke wasn’t a direct witness, but sought to compile a more orderly account of all the initial eyewitness reports of what happened [Lk 1:2-3], and noted that the witnesses had seen, heard, and touched Jesus after the Resurrection (i.e. Jesus was alive in the flesh and not simply a ghost or vision) [Lk 24:37-43]. And God Himself repeatedly pointed the Israelites back to the historical fact that He had miraculously rescued them out of Egypt [Ex 20:2, Lv 11:45, De 7:8, Am 2:10, etc]. In fact, He established a yearly ritual (the Feast of Unleavened Bread) to remind them of this Passover event [Ex 12:14, 25-27]. Later, when Joshua led them across the parted Jordan River, he had a monument erected with stones from the bottom of the river specifically to remind their descendants of what God had done for them in the past [Jos 4:6-7].

Why is the distinction between private and public events important? Private events depend on the truthfulness of the one recounting the event, while their account of a public event can be refuted by other witnesses if it doesn’t correspond with reality. For instance, Islam hinges on Mohammad actually being visited by an angel while he was alone in a cave. Mormonism depends on Joseph Smith actually being visited by an angel. Appealing to the actual occurrence of historical events is problematic for scammers (such as Smith’s supposed “Reformed Egyptian” that he tried claiming he had translated), but not for those telling the truth.

So, as we Christians have just celebrated one historic event and prepare to celebrate the turning point of all human history, I am grateful that God has established a public record to remind us of His actions throughout history. While there is revelation given to certain individuals directly in the Bible, God also often provided public signs and miracles to attest to the authenticity of their prophecies. We memorialize things with monuments so that we “never forget”, and God has likewise set up a string of historical events to serve as markers of His faithfulness – monuments to remind us lest we forget what God has done. 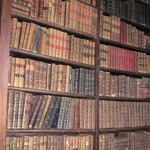 I came across an article recently about the top ten new books to read in the coming year, and it reminded me of a statement by C.S. Lewis about the value of old books. With that in mind, I’d like to put Lewis’s statement out there for a new generation that may not be familiar with it, and give a few examples of how his assessment of new vs. old can help us today. I’ll refrain from any attempt at a top ten list, but hopefully, you’ll come away this week with a sense of what to include in your own “must read” list for the new year. Let’s start by rejecting what Lewis famously called “chronological snobbery”: “the uncritical acceptance of the intellectual climate common to our own age and the assumption that whatever has gone out of date is on that account discredited.” He continues,

“You must find why it went out of date. Was it ever refuted (and if so by whom, where, and how conclusively) or did it merely die away as fashions do? If the latter, this tells us nothing about its truth or falsehood. From seeing this, one passes to the realization that our own age is also “a period,” and certainly has, like all periods, its own characteristic illusions. They are likeliest to lurk in those widespread assumptions which are so ingrained in the age that no one dares to attack or feels it necessary to defend them.”[1]

What solution did Lewis propose?

“The only palliative is to keep the clean sea breeze of the centuries blowing through our minds, and this can be done only by reading old books. Not of course that there is any magic about the past. People were no cleverer then they are now; they made as many mistakes as we. But not the same mistakes. They will not flatter us in the errors we are already committing; and their own errors, being now open and palpable, will not endanger us. Two heads are better than one, not because either is infallible, but because they are unlikely to go wrong in the same direction. To be sure, the books of the future would be just as good a corrective as the books of the past, but unfortunately we cannot get at them.”[2]

Let’s flesh that out a little. Reading old books helps us in the following ways:

With that in mind, what will you read this year? The same faddish books that will be forgotten in a year? Or something that’s stood the test of time? Books you can read and safely let your mind atrophy without fear of any mental exercise being required? Or maybe something a little tougher to digest?  Books that will congratulate you just for showing up? Or books that will make you realize you’re in the presence of greatness, and inspire you to build on their foundation and pursue still greater heights? Books that will simply affirm your own views? Or ones that will challenge the errors you may be overlooking? Invest your reading time wisely this coming year.