As the Christmas celebrations wrapped up, a friend shared the following quote yesterday from atheist New Testament scholar Bart Ehrman:

“The God of Christmas is not a God of wrath, judgment, sin, punishment, or vengeance. He is a God of love, who wants the best for people and gives of himself to bring peace, joy, and redemption. That’s a great image of a divine being. This is not a God who is waiting for you to die so he can send you into eternal torment. It is a God who is concerned for you and your world, who wants to solve your problems, heal your wounds, remove your pain, bring you joy, peace, happiness, healing, and wholeness. Can’t we keep that image with us all the time? Can’t we affirm that view of ultimate reality 52 weeks of the year instead of just a few? I myself do not believe in God. But if I did, that would be the God I would defend, promote, and proclaim. Enough of war! Enough of starvation! Enough of epidemics! Enough of pain! Enough of misery! Enough of abject loneliness! Enough of violence, hatred, narcissism, self-aggrandizement, and suffering of every kind! Give me the God of Christmas, the God of love, the God of an innocent child in a manger, who comes to bring salvation and wholeness to the world, the way it was always meant to be.”[1, emphasis mine]

I get it. We tend to like the “God of Christmas”: the God who sends Jesus to be born as one of us, the God who so loved the world that He sent His Son for us, the God who is “pleased as man with men to dwell, Jesus, our Immanuel!”[2] Unless you have some psychosis where you resent being loved, who wouldn’t want “that God”? But here’s the thing. God isn’t one-dimensional. We often complain about books and movies where the character development is shallow, and each character has one personality trait that is exaggerated to the exclusion of all others. Then, why do we want God to be equally one-dimensional? Can He not be loving and just? But justice requires the judgement that Bart resents. Can He not love us, and punish evildoers? It’s hard to complain of the “problem of evil” if you specifically reject a God who judges and punishes evil.

What I think Bart is missing is that the “God of Christmas” is necessarily the same “God of the Cross”. You can’t have the manger without the cross, or the cross without the manger; they are twin pillars  in God’s plan of redemption.  We must not forget that the birth of Christ is not really functional without the other pillar: Easter. These two events, separated by about 33 years, mark the beginning and completion of a critical phase of God’s redemption plan established before the world was even formed. If Jesus had simply materialized at the cross to be a sacrifice for our sin, he wouldn’t have lived a sinless life [2Cor 5:21, Heb 4:15] to be an unblemished sacrifice [Heb 9:14]. If Jesus had been born and lived His perfect life, only to die the familiar and final death of men, then He would’ve been a great teacher and role model, but not our redeemer bringing eternal life, and we would be no better off than before He came. We can’t have one without the other. While we may feel more comfortable with the lowly child Jesus, the incarnation through a virgin birth was the necessary beginning that must end in the crucifixion and resurrection. The purpose of Jesus becoming that “innocent child in a manger” that would satisfy Bart, was to become the sacrifice that would satisfy the wrath of God that Bart resents.

Does wrath make you uncomfortable? It should. Left to face the perfectly fair justice of God on our own, wrath is rightly ours to bear. But that doesn’t have to be our fate. For God so loved the world, that He sent His Son [Jn 3:16], not to stay a sweet lowly baby, not to merely be a good teacher, and not to be an interesting story to ponder centuries later, but to be the mediator between us and God [1Tim 2:5], to be our great High Priest [Heb 2:17-18, 7:25], to pay the price for sin that we might receive the free gift of God [Rom 3:23-24, 5:8, 6:23]! There is no dichotomy here – the  God of Christmas and the God of the Cross are one and the same. For that sweet baby came to be our ransom and take the wrath of God; and the cross and subsequent resurrection were the culmination of God’s love for us in sending Jesus to redeem us, and Jesus’s love for us in sacrificing His life for us. Christmas and Easter are both necessary pillars supporting God’s plan for our salvation. So give me that God, that is big enough to orchestrate a plan so much grander and better than anything Bart Ehrman, or me, or anyone else could ever come up with. Give me that God, who is loving and just, whose wrath is righteous, who is the only one who can be trusted with vengeance, who judges fairly and consistently, yet whose mercy and grace are unfathomable.  Give me that God, who loved me while I was His enemy, with a costly, sacrificial love, but also loves me enough to not let me stay wallowing in my sin. Rather He disciplines me, convicts me, molds me, even though it’s uncomfortable, but it’s for my own good, even when I can’t see that far.

In short, give me… the God of the Bible. 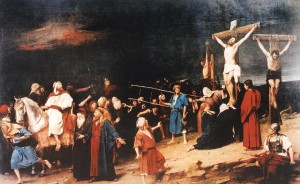 Over the course of the last several posts, we’ve looked at the consistent appeal to evidence in the apostle John’s eyewitness account of the ministry of Jesus. Today, we come to the climactic scene of the crucifixion in John 19. Jesus had been arrested and tried in a kangaroo court during the dead of night in chapter 18. He had been brought before the Roman governor Pontius Pilate to ensure the death penalty can be carried out. Despite his finding Jesus innocent and offering to release Him, the chief priests, in an attempt to manipulate Pilate and curry favor with Rome, had called out Pilate as “no friend to Caesar” if he released Jesus. And so Pilate gave in to their demands, and played a part in Jesus’ plan of atonement for all mankind in the process. So Jesus was crucified Friday morning. The Jewish Sabbath started at sundown, however, and the priests wanted to make sure the bodies of Christ and two robbers didn’t remain on the crosses past sundown. But that meant accelerating the asphyxiation process that typically killed crucifixion victims. So they asked Pilate to have the victim’s legs broken so they couldn’t push up with their legs to take a breath. Asphyxiation would follow quickly instead of dragging on for hours or even days as intended with crucifixion. But John recorded a little earlier that prior to this, Jesus had cried out, “It is finished!”, bowed His head, and gave up His spirit. Therefore, when the Roman soldiers came up to Him, they found Him already dead, hence breaking the legs would be unnecessary. Nevertheless, Roman soldiers were responsible for being sure that those sentenced to death really did die (or face death themselves), so one of the soldiers took a spear and thrust it up into the side of Jesus. And here John records an interesting statement: “immediately there came out blood and water. And he who has seen has borne witness, and his witness is true; and he knows that he is telling the truth, so that you also may believe.”

Now, anybody who has ever had or even seen a bleeding injury, knows that it’s normal for blood to come out of a wound, but not water. What is John to do with this oddity? As Matthew Henry says in his commentary on this verse, “What a competent witness he was of the matters of fact. What he bore record of he saw; he was an eyewitness of it. What he saw he faithfully bore record of; he told not only the truth, but the whole truth.” [1] It would’ve been easy to tell most of what he saw, and leave out that puzzling detail. Indeed, down through church history, we see believers looking for how to interpret this observation. As Origen wrote in the 3rd century, “Now, in other dead bodies the blood congeals, and pure water does not flow forth.”[2]  Hippolytus also noted that “streams which flow not from dead bodies flowed forth from Him.”[3] John Chrysostom, Theodoretus, Cyril of Jerusalem,  and other Church fathers all noted the same basic observation, and theorized as to what “mystical”, symbolic intent John must have had.  maybe it was symbolic of Jesus being the source of eternal life like a spring of water. In the 4th century, Rufinus offered that the water might symbolize the washing of saints and the blood the condemnation of unbelievers, or that they symbolized baptism by water and by martyrdom. He also guessed that the wound in the side might symbolize a connection with how Eve was made by removing Adam’s rib. [4] Cyril of Jerusalem supposed that “Jesus, who came to bestow the grace of pardon on men and women alike, was pierced in the side for women”. [5]Jerome, writing in the 4th and 5th centuries, described the blood and water as the “twin emblems of baptism and martyrdom.” [6] While there may be symbolism that can be attached to this, John seems to be insisting that this is first and foremost true, literal, witness testimony. So which is it?

Now, with the advancements in medical knowledge of the last 1900 years, we know about the condition of pericardial and pleural  effusion, the collection of fluid around the heart and lungs, respectively. [7] Now, we don’t need to try to determine some purely symbolic meaning from this text. We can see that, indeed, John was simply recording accurately exactly what he saw, even if the physical phenomenon  wouldn’t be understood for centuries. But now, we are also left with a bigger question. If he would dutifully record what he couldn’t explain, emphasizing so carefully that he was speaking the truth about this evidence – and we now know it to be a legitimate and plausible explanation – doesn’t it stand to reason that he would be equally honest in the rest of his account? Perhaps we would do well to pay heed to all that John has recorded for us of the incredible life of Christ… and all that implies.