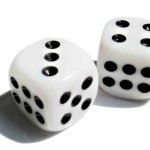 I’m in Honduras this week, where I gave a presentation on evidence for intelligent design in the genetic code. Some of my presentation was based on past blogs on design (here) and DNA (here). But now I’d like to show you a different part of the presentation dealing with the nature of “chance” as this seems to come up a lot in discussions of the origin of life. Enjoy!

First off, what is chance? It has been defined as “the absence of any cause of events that can be predicted, understood, or controlled”.[1] Chance can’t actually cause anything. It’s simply the explanation left after physical-chemical laws and design have been ruled out; it is the so-called “null” hypothesis that there were no discernible patterns pointing to necessity or design. So let’s look at this way of describing the tendencies of events we don’t understand, can’t control, or can’t predict with certainty.

Chance events will have certain odds associated with them. For instance, in a lottery, the odds of winning might be 1 in 100 million. So what are the odds of DNA developing by chance? better or worse than a lottery? How do we determine what the worst case odds possibly are? Let’s start with a basic example. Supposing you rolled 2 dice once every second for a minute, hoping to get a pair of sixes. You have a 1 in 36 chance of getting that pair of sixes on each roll, and 60 chances to get that particular result each minute. Your odds of winning are still only 1 in 36 each roll, but you’ve made a win relatively likely by increasing what’s called your probabilistic resources, the number of rolls of the dice.  So with the resources of 60 rolls, you will generally see 1 pair of sixes result. If you were able to roll 100 pairs of dice at the same time, you would have 6,000 chances each minute of play. Thus you would have sufficient resources to witness something more unusual, like 2 pairs of sixes (1 in 1,296 odds), but probably not something like 10 pairs (1 in 60 million odds). To assign some event to chance rather than design, we need to compare the odds of it happening to the resources available.

One way we can eliminate chance is by looking at the Universal Probability Bound. That is a way to determine statistically whether something is possible through random processes by conservatively estimating the maximum probabilistic resources of the entire universe as an upper limit. For instance, this has been used by security analysts to determine whether computer codes can be broken by brute force attacks. The universal probability bound does this by looking at the fastest possible “dice roll” with the most possible “dice” for the longest possible time.

Multiplying these 3 together gives us a very conservative estimate of the maximum resources of the entire universe for causing a random event. Therefore, if the odds of any event are less than 1:10^150, it’s just not reasonable to say it happened by random chance.
What do these extraordinary odds look like? This: 1 chance in … 1,000,000,000,000,000,000,000, 000,000,000,000,000, 000,000,000,000,000,000,000,000,000,000,000,000,000, 000,000,000,000,000,000,000,000,000,000,000,000,000, 000,000,000,000,000,000,000,000,000,000,000,000!
This is our standard for saying that we have eliminated chance as a possible cause. When we find that many biological and cosmological systems in our universe didn’t have to be the way they are, but have odds of occurring by random process less than that, we have to assume intervention of some kind. But just how bad are the odds for random formation of the first reproducing cell?
First, 20 protein-forming amino acids must form (1) peptide bonds (2) using only L-isomers in (3) stable, functional, 3D folded structures to form proteins. Many proteins are then required to form one cell. That cell must be complex enough to be able to reproduce before evolution could even begin. This happening by random hookups in a “prebiotic soup” is an uphill battle to say the least.
The odds of the chance formation of a single minimally functional protein composed of only 150 amino acids is roughly 1 in 10^164. This is 100 trillion less likely than that outrageously long number above. And that’s only for a short 150-acid protein. They’re typically composed of several hundred to several thousand amino acids. The odds of chance formation of 1 minimally complex cell of only 250 proteins is roughly 1 in 10^41,000. Again, this would be far less than what we typically see. The smallest self-replicating cell in the wild is 482 proteins, and scientists were able to knock out 100 of its proteins to arrive at a 382 protein cell that could still replicate (although with much other normal functionality removed). This is still 132 proteins more than the generously low number of 250 we’re assuming for a threshold.[2]
The Bible tells us that “His invisible attributes, namely, His eternal power and divine nature, have been clearly perceived, ever since the creation of the world, in the things that have been made. So they are without excuse.”[3]  Similarly, David wrote in the Psalms that “the heavens declare the glory of God.”[4] It seems that, as our ability to observe nature has increased, so too has its declaration of God’s glory. Now we find that it’s not just the starry night sky that speaks to us of God’s creative power. Every one of the roughly 50 trillion cells in our bodies screams at us that they are not the result of chance, but of incredible design beyond human abilities. Will we listen, or will we continue buying atheistic lottery tickets?