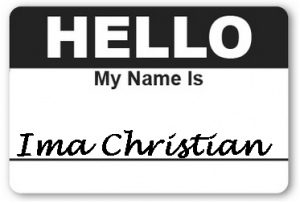 A couple of weeks ago, my church hosted J. Warner Wallace for a weekend of great presentations on the objective nature of truth and the reliability of the New Testament manuscripts. If you’re not familiar with Jim, he was a cold-case homicide detective in California who has racked up an impressive number of convictions in long-unsolved murder cases. In fact, you might even recognize him from the TV show “Dateline”, as they’ve documented several of his cases. He was also an ardent atheist until he decided to investigate a really old “cold-case” of a different type: the case of what happened to Jesus of Nazareth. To hear “the rest of the story”, as Paul Harvey would say, check out his links below [1]. But now on to what he said that got me thinking. In his closing prayer, he said something to the effect of Christianity being “more than a label” for us.

We identify ourselves with lots of labels – political ones, religious ones, cultural ones – but does that self-identification actually make us those things? Not necessarily. Of course, political partisans will often talk about someone in their party being one “in name only”, such as a RINO, or Republican In Name Only, for example. The idea is that though this person calls themselves a fill-in-the-blank, they aren’t actually; they’re a poser. It is, in effect, a charge of hypocrisy, that the person is saying one thing and doing another. A similar thing happens in engineering, although with potentially more life-threatening consequences.

All of the states I’m licensed in as a professional engineer put out newsletters that include summaries of disciplinary actions taken against individuals. Most of these are against practicing engineers who did things like practicing after their license had expired, maybe because they forgot to renew it. Some aren’t so justifiable, and are serious ethics violations. But occasionally, action is taken against a person who pretended to be an engineer when they weren’t. They’ve claimed the title, or label, but have never done the hard work to acquire the book-learning and mentored training, pass the long arduous tests, and get the license. Some even have enough familiarity with engineering to keep up that charade for several years. But are they professional engineers even when they achieve similar results to engineers? No. They haven’t been granted that title by one having authority to grant it.

What about calling myself a Christian? Can I take that label for myself just because? No. My actions need to match the claim or I’m a hypocrite. I can’t go stealing and lying and murdering and call myself a Christian. But even if I don’t do those things, does acting the part make me a Christian? No, actually. I can be an incredibly nice person, and do lots of wonderful deeds, and call myself a Christian, but even that doesn’t make it so. Consider that Jesus said that the way leading to life was narrow, and that few found it, while the path to destruction was broad and crowded [Matt 7:13-14]. Moreover, many would come to Him saying that they had done all kinds of good things in His name, even working miracles. His response? “Depart from Me, I never knew you.” [Matt 7:21-23] That should be a sobering warning. The apostle John told his audience that  there were those that had gone out from them that had never been part of them [1 Jn 2:19]. They played the Christian game for a while, but eventually moved on. Jesus also talked about letting the wheat and the tares (i.e. saints and sinners) grow together until the harvest, when they would be separated out [Matt 13:24-30]. As Matthew Henry commented on this passage, “It is not possible for any man infallibly to distinguish between tares and wheat,” and, “The tares, if continued under the means of grace, may become good corn; therefore have patience with them.”[2]

So who is a Christian? The Christian is that one whom God has saved. How? They have called out to Jesus Christ, for there is salvation in no one else [Acts 4:12]. How? They have repented of their sins [Acts 3:19, 17:30, Rom 2:4], acknowledged that Jesus Christ is Lord, and believed that God raised Him from the dead [Rom 10:9-10]. That title of “Lord” entails obedience to Him, not just lip service. As Wayne Grudem says in his Systematic Theology, it is “contrary to the New Testament to speak about the possibility of someone accepting Christ ‘as Savior’ but not ‘as Lord,’ if that means simply depending on Him for salvation but not committing oneself to forsake sin and to be obedient to Christ from that point on.” [3] God doesn’t command us to get our lives “straightened out” before He will accept us, for we could never meet His perfect standard in our own strength. But He does command repentance: that godly grief over our sin and the decision to turn away from it and toward Him that leads to salvation [2 Cor7:9-10]. And when we turn to Him, we put our trust in Jesus Christ, the only one who could meet that perfect standard of righteousness [2 Cor 5:21]. A changed life then is the fruit of that repentance.

Being a Christian is not simply a label we claim, or a title we earn, or degree we obtain, but rather an eternal relationship with our Creator. If you are a follower of Christ, may “Christian” be so much more than a mere label for you. And if you’re not a disciple of Christ yet, may you not be deceived and turned away by those for whom it is just a label. Til next time, may God richly bless you in your search to find truth, and in so seeking, find Him. “Seek and ye shall find.”