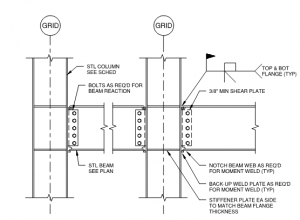 What do you get when structural steel connection design deadlines and blogging collide for a workaholic engineer and amateur blogger? Worldview analysis doesn’t pay the bills like engineering analysis, so you get… this week’s post.  But a couple of recent projects did get me thinking about the things we put our confidence in.

Engineers don’t like to reinvent the wheel, so once we get something laid out to our satisfaction, we reuse those details whenever we can. One typical detail I see over and over again from engineers all over the country is for column moment connections with stiffener plates but no web doublers. For this post, let me just say these are 2 different configurations of reinforcing that mostly address different conditions. These engineers  feel like they’re covered for their designs and can sleep well at night because they required the fabricator to reinforce that area. “When in doubt, make it stout”, right? But then they delegate the tedious part of actually designing the connection to the fabricator, who hires me. But I have to actually go beyond just the conceptual intent and make the connection actually withstand the specified loads and be buildable. And I have to provide calculations to the Engineer of Record (EOR) proving that what I came up with actually works. And that’s where problems begin to crop up. Too often, the stiffener the EOR showed in his typical detail is reinforcing for a failure mode that isn’t even close to governing. Panel Zone Shear is often the limiting condition, but those stiffener plates do nothing for that. The engineer telling the fabricator to install stiffener plates but not doubler plates has a misplaced confidence. He’s trusting one component to protect against a certain type of failure, when the column will fail in another way first. The extra work he’s creating for the fabricator (and me) actually isn’t helping because it’s not putting reinforcing where the critical load is. To borrow a military analogy, it’s like putting all your guards at the front gate while your enemy sneaks in the back. Well, too often, by the time the project gets to me, the columns and beams  are already ordered from the mill, and it’s too late to go changing sizes because of the connection design. While they are adequate for the overall building design, the framing  may be sorely undersized for addressing the bottleneck of load paths at the connections. To quote the maestro of connection design, Bill Thornton, “Many, if not most, collapses are caused by inadequate connections… Yet, connections are often an afterthought.” [1]

Do we do the same? Too often we put our confidence in things that will let us down. Sometimes, it’s because we really did try to investigate thoroughly and failed to see some significant problem. But often, we do it because we never even bothered checking; like those tedious connections, it was an afterthought. But in spiritual matters, finding out you were wrong after it’s too late has the most serious and eternal consequences. That’s why Pascal, in the 17th century, considered this such an important task: “The immortality of the soul is something of such vital importance to us, affecting us so deeply, that one must have lost all feeling not to care about knowing the facts of the matter.”[2] Are you putting your faith in ungrounded atheist dogma that there is nothing to be concerned with after our physical bodies die? Or, as is a common error in our time, trusting in an almost magical “science” to solve everything, assigning to science properties it never has had, nor ever can have? Are you trusting that the human race is getting better and better, and that we’ll eventually evolve to ever higher forms of life?

Everything that depends on fallible humans can disappoint you and let you down. In the end, there is only One whom we can always be confident in. An encounter with that One led the Apostle Paul, a former opponent of Christians who did everything he could to stamp out Christianity, to become a Christian himself, and later say, “I know whom I have believed and I am convinced that He is able to guard what I have entrusted to Him until that day.” [2 Tim 1:12] Paul was able to go to his death for being a Christian, with no regrets, and no fear, because he knew he had placed his confidence in the one true God – the only infallible, perfect, sovereign Creator and Ruler.