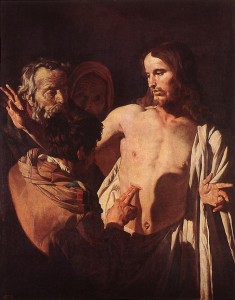 My wife and I went to see the movie Risen this past weekend, about a (fictional) skeptical Roman Tribune investigating the claims of Jesus being risen from the dead. So this seems like an appropriate time to finish up our look at the evidential nature of the apostle John’s gospel with a look at some of Jesus’s post-resurrection appearances recorded there.

First off, we start John chapter 20 with Mary Magdalene, one of Jesus’s followers, reporting to John and Peter that the tomb is open and Jesus’s body has been taken. Peter and John ran to investigate for themselves. John got there first and looked in the tomb and could see the linen wrappings lying there. Peter rushed in and saw the wrappings lying there, and the face-cloth lying separately, rolled up in a place by itself. I like John’s attention to details in things like this. John then records that he entered the tomb, “and he saw and believed.” But he goes on to say that they “did not yet understand the Scripture, that He must rise again from the dead.” And so they went back to their homes, perhaps to try to make sense of what was happening, while Mary lingered at the garden tomb, weeping. And so it is that she becomes the first witness of Jesus after the resurrection. She came back to the disciples, telling them “I have seen the Lord,” and gave them a message from Him. That evening, Jesus suddenly appears before them, in the locked room they were gathered in, where He showed them both His hands and His side. This miraculous entrance and presentation of His mortal wounds left no question as to whether this was Jesus or not. Yet Thomas was not with them, so they joyfully proclaimed to him, “We have seen the Lord!” But he didn’t believe them.

Whether “Doubting Thomas” deserves all of the bad reputation he has or not, he nevertheless famously responded that unless he personally saw the nail imprints and put his finger in the nail holes and his hand into the spear wound, he would not believe. He had Mary, John, and Peter’s testimony of the empty tomb. Granted, that could simply mean grave-robbing, or relocation, as Mary had first assumed. But then he had Mary’s testimony of seeing and talking with Jesus. Perhaps she was hysterical in her grief. But then the rest of the disciples had now seen the evidence Thomas specifically wanted, and reported it to him, and it still wasn’t enough.

I sympathize with Thomas in his desire for personal verification, but we all have to understand that we can’t verify everything directly. In fact, most things in life are such that we can’t directly verify them and have to accept the testimony of others, whether they be historians, or scientists, or eyewitnesses and subject matter experts in court, or simply friends that have been places and seen things we haven’t. Therefore, when Jesus reappeared in the locked room a week later, when Thomas was there, He reprimanded him for his unbelief. But first, He offered Thomas the evidence he had asked for: “Reach here your finger, and see My hands; and reach here your hand, and put it into My side; and be not unbelieving, but believing.” John doesn’t record for us whether Thomas followed through on his earlier statement, but I suspect he didn’t feel the need to once he was face to face with Jesus. What John does record is Thomas’s quite sensible response to Jesus: “My Lord and my God!”

At this point John records a verse that often gets taken out of context to try to say that Jesus prefers a “blind faith” to an evidential faith. Let’s look at verse 29 now: “Jesus said to him, ‘Because you have seen Me, have you believed? Blessed are they who did not see, and yet believed.'” Is that what Jesus means here? I don’t think so. Note that Mary thought the body had been taken until she saw Jesus herself. Note that John says he believed when he saw the scene in the empty tomb. Note that Jesus was now showing Thomas what He had shown the other disciples the week before that caused them to tell Thomas that they had unequivocally seen the Lord. I don’t think He was talking about the other disciples believing without seeing.

While the disciples were able to see the truth of Jesus’ claims directly, there are two groups of people prevented from believing on the basis of direct sight: those separated by space and time from the events. Everyone to whom the disciples were sent to testify, all over the world, could not directly see these things. All of us that have lived both before and after that time can not directly see them either. Yet the letter to the Hebrews, in the famous “faith chapter”, tells of saints like Abraham, living prior to Jesus, who trusted in God’s promises, “having seen them and having welcomed them from a distance.” [Heb. 11:13] And in Jesus’s “high priestly prayer” recorded in John 17, He prays to God the Father both for His disciples and “for those also who believe in Me through their word.” [John 17:20]

We use our minds every day to reason through competing possible explanations for events that we weren’t able to witness directly based on what we do know about them. We still have an evidential basis for our conclusions, just not complete enough to draw a conclusion without some reasoning. Just as a jury can become rationally convinced of the details of a crime without having seen it firsthand because of applying reason to the partial evidence they have, God can and does convince us through our minds as well as our senses.  And here in John 20:29, I would suggest that Jesus is simply stating the value of using the minds He has created us with to recognize His truth even when we don’t have all the answers yet.