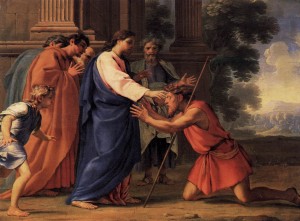 The last month, I’ve been looking at the evidential nature of faith shown in the Bible. Contrary to popular claims of Christianity being a “blind faith” Jesus routinely backed up his claims with proof. Let’s look at one person’s journey to belief as recorded in the Bible.

The apostle John describes a time that Jesus and his disciples passed a man begging who had been born blind. The Jews thought this must be punishment because of something his parents had done, or some sin he had somehow committed in the womb. So they asked Jesus which explanation for the man being born blind was correct. Jesus responded that it was neither, but rather “that the works of God might be displayed in him.” [John 9:3] He then healed the man, and John records that the neighbors who had previously seen this man begging debated whether this was the same beggar who had been blind, or someone who simply looked like him. John notes that the man had to keep insisting that it really was him. This always strikes me as a somewhat comical situation, though probably frustrating for the man. The people very reasonably asked him how he can see now, and he told them the man called Jesus healed him. They brought him to the Pharisees, the religious scholars of the time, and some of them decided that because Jesus had healed the man on the Sabbath (the day of rest under the law), He must not be from God. And yet some of them appealed to the evidence at hand, saying, “How can a man who is a sinner perform such signs?” [9:16] When they asked the formerly blind man who he thought Jesus was, he said “a prophet.” They didn’t like this answer, so they called the man’s parents to testify whether this was really their son who had been born blind, and how he was able to see now. [9:19] His parents confirmed that the formerly blind man was indeed their son, and that he was born blind, but they didn’t know how he could see now. Out of fear of opposing the chief priests, they deferred to their son, saying “He is of age, ask him.” So the priests interrogated him again, saying, “Give glory to God, we know that this man [Jesus] is a sinner.” While it may have been a bit of a leading question, the beggar took it in stride and replied, “Whether He is a sinner, I do not know; one thing I do know, that, whereas I was blind, now I see.” [9:25]

I encourage everyone to read the full passage, as the rest of the beggar’s exchange with the priests is actually pretty comical, but I want to focus here on the importance placed on evidence and reasoning throughout this story and many other biblical accounts. This whole proceeding is being conducted like a trial, with a panel of judges, witnesses being called, and testimony given and examined (if a bit hostilely). People on both sides of the issue are looking to determine the facts of what actually happened before they decide who to believe. And the beggar admits what he doesn’t know while being confident in what he does know. Moreover, as the interrogation of the beggar proceeds, he tells the priests, “Since the beginning of time it has never been heard that anyone opened the eyes of a person born blind. If this man were not from God, He could do nothing.” [9:32-33] Although the priests didn’t take being lectured by a beggar very well (they threw him out of the synagogue), he rightly recognized the significance of the miracle Jesus performed on him. Afterwards, John tells us that Jesus heard they had thrown him out. He sought him out, and asked him if he believed in the Son of Man (the title Jesus most commonly used of Himself, referring back to the vision of the prophet Daniel). [Daniel 7:13-14] The beggar asked who this was, that he might believe in Him. When Jesus told him that “you have both seen Him, and He is the one talking with you,” the beggar’s response is both honest and reasonable. He said, “Lord, I believe,” and worshiped Jesus. [John 9:38] When John tells us that the beggar worshiped Jesus, that’s not spoken lightly. Even the lowliest Jewish beggar would grasp the serious consequences of worshiping anyone other than God. Yet, he did just that, because Jesus’ answer explained the evidence.  Jesus had done for him what no human could do, and when Jesus explained that He was no ordinary human, but none other than God Incarnate, the pieces fell into place, and the man believed. Like the beggar, we are all born spiritually blind. And like him, only Jesus can open our eyes. The question is, how will you respond to Him?