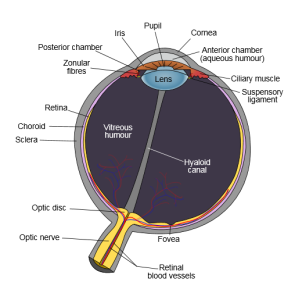 Last week, I wrote about some general problems I saw with Richard Dawkins’ claims of “sub-optimal design” in natural objects like the human eye. I recommended that we keep in mind our own finite knowledge and approach the matter with the same humility an engineer should approach a peer review of a colleague’s work. This week, we’ll need to get a little more technical to see Dawkins’ error, but let’s do a little “peer review” of that particular case of the human eye.

Dawkins’ problem with the eye is that the rods and cones (the photosensors) point toward the back of the eye, while the nerves (the “wiring”) come out the back of these sensors into the interior of the eye before being bundled up into an optic nerve that connects to the brain through a hole in the retina, causing a “blind spot” where there can’t be any sensors because of the hole and the nerve bundle. Admittedly, this is counter-intuitive. And yet, the eye is an amazing machine that the best human minds have not been able to rival. Whether it seems backwards to us or not, the eye seems to do better than we can with our “forward” thinking. Why might this backwards wiring actually be optimal?

Many times in my field, our structural systems are more complex than they could be otherwise because of other systems such as heating and air. Let’s face it, on a hot, humid, summer day in the Southern US, the best structure is useless if nobody can stand to be in the building because there’s no air conditioning. With the eye we have a similar issue: we need wiring (i.e. nerves) for data transmission, but we also need plumbing (i.e. blood flow) to supply energy – and lots of it. The rods and cones of the retina are so sensitive, that a single photon of light can be detected. This is because a series of enzymes massively amplifies this minuscule stimulus to useful proportions. But this enzyme activity also makes the photoreceptor layer of the retina have one of the highest metabolic rates of any known tissue[1] and the highest in the human body.[2] The energy for this is supplied by a bed of oversized capilleries immediately behind the photoreceptor layer that floods the layer with near-arterial levels of oxygenated and nutrient-rich blood to satisfy these high metabolic demands. This arrangement of blood supply allows a high packing density of the rods and cones making up the layer, which allows for increased visual resolution. In the opinion of biochemist Michael Denton, it is “hard to imagine how a standard-type capillary network to carry the necessary quantities of blood directly through the photoreceptor cell layer could be arranged without causing at least some decrease in the packing density of the photoreceptors and a consequent decrease in the resolving power of the eye.”[1] Considering also that blood strongly absorbs light, this plumbing system can’t be in front of the photoreceptors, even though that would allow for the nerves to be routed to the rear and more “tidily” as Dawkins suggests. In fact, any other arrangement in humans appears  to create bigger problems than it solves.

However, atheists have looked to the cephalopods like the octopus and squid as examples of creatures with good eyesight whose eyes are wired “correctly” – photosensors facing forward, toward the light, and nerves directed toward the brain – eliminating the admittedly minimal blind spot of the human eye. Although their visual acuity is comparable to some fish that have inverted retinas like us, octopuses operate in environments where ambient light is more diffuse or even negligible for the deep-sea dwelling varieties. Whereas we would actually need something to reduce the amount of incoming light if our sensitive photoreceptors faced the light like theirs, that placement is an advantage in their environments. Energy conservation can also be a design parameter. In fact, studies in different species of flies have shown that optical data transmission from photoreceptors increases with light, and there is an energy cost associated with photoreceptor activity which is at a minimum in total darkness and a maximum in full daylight. This cost can be significant as one species of fly tested used up to 2% of its total base metabolic rate just powering the photoreceptor layer of its eyes. And that was just the “ready state”, in total darkness. As ambient light increases, optical data increases, and with it, energy demands. However, the octopus’s copper-based blood, hemocyanin, only supplies roughly one-quarter of the oxygen as our iron-based hemoglobin.[4] Based on the experimental confirmations from the fly testing, it is reasonable that humans operating in full daylight will have a much higher metabolic demand than the octopus operating in the subdued light of shallow water or the near darkness of deep water. This then makes perfect sense for us to have the inverted retina we have, with its high-capacity power delivery system, while the verted eye of the octopus is more reasonable in their environment. Our inverted photoreceptors then appear to be the best possible solution, even with the introduction of a blind spot. However, this blind spot is situated in an area of each eye not used for focused vision, is in a different spot in each eye so that the input from the other eye compensates for it, is adequately corrected for in the image processing  occurring in the brain, and is actually a smaller blind spot (approx. 6°) than the most obvious blind spot for humans: our own nose, which blocks out a larger field of view for each eye.

One last thing to point out to armchair engineers like Dawkins is this: show me we can do better. If our eyes are so offensive, show how we could improve on them. Yet with all our scientific knowledge and advancements in technology and some of the best human minds working on a visual prosthetic for blind people, the pursuit of a man-made eye is still woefully primitive. It seems extraordinarily hypocritical to me to criticize another’s design, whether a fellow engineer’s or God’s, if I can’t even come close to designing something comparable. We are at the level of allowing a blind person to differentiate between light and dark, between the presence of a large opening like a door versus a solid wall, and between crude outlines of shapes that would make the old PONG computer game of the 80’s seem like an IMAX 3D movie. It’s easy to criticize something from afar. But in engineering, getting intimately familiar with the details of a problem is what makes or breaks a design. And the more we familiarize ourselves with the constraints and objectives of the human eye, the less we find to criticize.