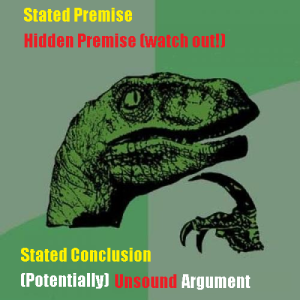 It’s hard to be on the internet these days without seeing these “memes” (rhymes with dreams). Memes (also called image macros), are clip art or photos with whatever caption a person wants to use to convey an idea. Atheist Richard Dawkins is credited with coining the term back in 1976 to describe the concept of a piece of cultural information propagating and changing over time in an evolutionary fashion. He derived the name from the Greek word for mimicry, “mimema”, as he was trying to show how ideas could propagate through imitation and evolve over time. With the advent of the net and things “going viral”, the name has stuck around, if not exactly the same as he intended.[1] The common internet memes we see so often today might also be classified with another similar-sounding, but unrelated, term: enthymemes. What’s that? Glad you asked. An enthymeme is an abbreviated syllogism, and a syllogism is a set of 3 propositions: 2 premises and a conclusion. The classic example is the following:

Premise 1) All men are mortal.
Premise 2) Socrates is a man.
Conclusion) Therefore, Socrates is mortal.

An enthymeme shortens this format down to only 2 propositions. “Enthymeme” comes from the Greek word en-thymos, meaning “in mind”, because one proposition is “kept in mind” instead of stated.[2] This can take a couple of forms. The conclusion can be left out as a form of rhetorical setup where the audience makes the connection given the 2 premises that are allegedly true. An example of this could be something like, “Only lawyers are qualified to serve in Congress and write laws, and I don’t see a law degree hanging on your wall…” The intent is for the audience to fill in the conclusion in their own mind that the speaker’s opponent wouldn’t be qualified to serve in Congress by that measure. Hopefully, they would also question the truth of the first premise, but I digress.

More commonly, one of the premises will be given, along with a conclusion that is supposed to obviously follow from that. Here’s where we have to not rush to agree with the catchy sound bite until we’ve examined it a little closer (even if the conclusion expresses something we support). In this case, the conclusion is stated, so we know the author’s intent. The stated premise may be true, but there is typically a hidden premise (“kept in mind”) that may or may not be true, and that will typically determine whether or not the conclusion necessarily follows. Once we discover the hidden premise, then we can actually analyze the view being put forward. Why is this important? If the 3 requirements of clearly defined terms, true premises, and valid argument are met, then we have a sound argument and the conclusion has to be true (whether we like it or not). Therefore, it’s important to be able to see whether someone’s view is actually supported by the reasons they give.

Note: brackets are used to help keep track of the terms of each proposition to more clearly see the relationships between terms. Now we can see that this is indeed a valid structure because the conclusion does necessarily follow if the premises are true. But the argument still has to pass 2 other tests for the conclusion to be true: clear terms and true premises. In this case, the fetus is a separate human body with its own DNA, fingerprints, blood type, and gender, residing in the mother’s body. Therefore, it is not  part of her body, so the hidden premise is false. Also, most people wouldn’t think twice about restricting a woman’s right to control her own body if she were trying to commit suicide, so it would seem that even the stated premise is not true (at least not without being more specific). Now, the stated conclusion could still be true, but not for the reasons given by the author. This, then, is not a sound argument.

So before you share that next clever meme that supports your view, or get frustrated by one that doesn’t, take a few minutes to look for hidden assumptions. Then examine their logic. You might just be surprised how many popular sentiments don’t have a leg to stand on.